A car used to be an innovative solution. But now? It creates an emission problem.

In 1886, Carl Benz applied for a patent for his vehicle powered by a gas engine. This patent was the birth of the modern car. I don’t think Benz woke up one day and thought, “What a great day to invent the machine to harm our planet.”

That is an example of unintended consequences. It can create harm for our society and planet. Even though it’s unintended, it doesn’t mean it’s justified.

I don’t mean to pick on Twitter. But it serves as a great example. Twitter’s mission is to give everyone the power to create and share ideas instantly without barriers. While this mission empowers people, it has many other consequences, such as cyberbullying or fake news that can confuse society.

This condition raises a question: How can we be more mindful of this unintended consequence?

There’s a framework I’m thinking of using in my team: Layer of consequences.

The idea is to use this framework as a reflection tool whenever we think of a solution. Let’s say we have a potential solution we want to pursue, and we believe it solves the problem we framed. We then put our solution in the center and radiated the 1) Direct consequence, 2) Indirect consequence, 3) Unintended consequence.

The consequences can be positive or negative. 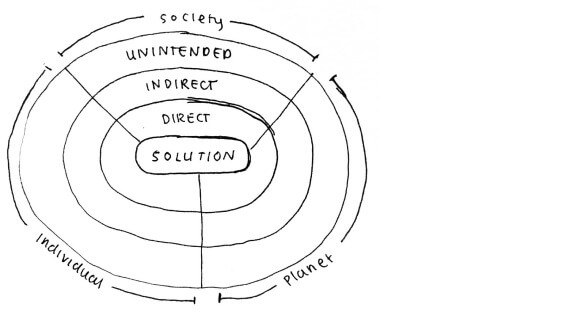 As a practitioner, we might say this adds another layer of complexity. But, if we don’t start intentionally talk about this and practice this with our team. We might contribute to more harm than positive impact.

Hi, this blog is no longer active. I move to substack. You can subscribe below or go to newsletter.buditanrim.co

Learn from the bad design alternatives

How to design a listing page?

Fixated on the solution too soon

The problem with dot voting

Start a project with alignment

Build a habit, not plan

Find what excites you

Is interface design an art?

Hiding from the decision

The story in our head

Optimism is not enough

Leadership in the design system

The questions from the candidate

My view on design practice

Take a vacation to learn

The alternative of hypothetical questions

End your meeting with reflection

We see what we want to see

A quick update and what's next

Silence is boring, but 50 million people would hope to hear silence

Inside out or outside in?

Ethical Design: Harms of our work

3 questions to improve your interface design

Reflection questions I lately use

Side effects of A/B testing

How to optimize apprenticeship?

How to choose a company?

Falling seventeen times in an hour

The reflection exercise during a pandemic

How to frame the design system rollout

Dancing with a stranger

Mindset in the new job

'It looks good to me'

Why do you work?

See your life as an experiment

My reflection on leadership

What should design managers do with OKR?

When was the last time you talked to users?

Inspecting interface design — HE vs. UT

A confusing interface that creates fire.

If F1 drivers get a trophy, what's our trophy?

Getting it right for the first time

Use Peltzman effect to communicate risk

Be the best version of yourself

If you coach a designer, do you need to know all the answers?

Show up and practice

Reader question: How to deal with promotion rejection?

Reader question: How to measure success?

How to draw an owl

On GUI history, learning, and writing.

Documenting is a good team’s habit

Have a hard time getting design feedback?

A manager cried in front of me.

Should I move to the managerial role?

Dealing with top down request

Every team has its unique challenges.

What do product designers do?

Should startups build a design system?

How I overcame my impostor syndrome

Give back to the community

Take things with a grain of salt

Should I build the feature request from customers?

The benefit of creating a design portfolio